The Liberal Democrats have been instrumental in helping the Conservative party realise their dream of passing through the Health and Social Care bill. A bill that failed to appear in either party’s manifesto and thus had no mandate to the voting public. The bill, which has been wholly rejected as acceptable by the health professionals who work in the NHS, citing competition and privatisation as being the major area of concern.

One in Ten Liberal Democrat peers have financial connections to companies involved in private healthcare. That is to say ten out of the 90 Liberal Democrat peers have direct financial links. This is considerably less that the One in Four Conservatives and the One in Six Crossbench Peers with such connections, with Labour Peers still to be calculated.

However, that is not to say this number is acceptable. It is not. Why are any peers with connections to companies that could benefit from the bill allowed to vote on it? 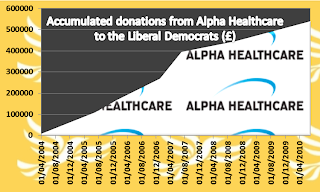 The Liberal Democrats as a party are heavily funded by a company called Alpha Healthcare, which have been donating to the party since 2004. The company has donated more than half the money the Lib Dems have taken in major donations since the start of the election campaign. The amount they have been giving has steadily increased over time, but last year it accelerated up to £400,000. It doesn’t take a rocket scientist to make the connection. Research conducted by Dr Éoin Clarke on his Green Benches blog revealed how this company had changed its company registration number and business premises after the 2010 lection, which meant their most recent donations didn’t show in the Electoral Commission’s website.

Is this what we want from our democracy?

In an email exchange with Baroness Barker, which followed my sending her the list of Lords interests, she seemed to be more concerned with the technical issue of whether her colleagues had registered their interests saying: ‘Please supply your evidence that any of the people named below who have taken part in the Health and Social Care Bill have failed to declare their interests as they are required to do.’ She misses the point.

As with the Conservative, Crossbench and as I have seen so far the Labour members, the connections to the companies vary across the sphere of influence. Some are connected by shareholdings; some are chairman, partners, advisors and directors. The merry-go-round of self-interest and the dubious methods in which power and influence affect our society must be changed, if the public are to once again trust our parliamentarians. They are after all meant to be public servants, but as the evidence accumulates, it becomes clear it is the corporations with which they appear to serve.

An e-petition has been set up which is here - http://epetitions.direct.gov.uk/petitions/31991 - if you can please sign it to stop Lords voting on their own interests, this would go some way to prevent their behaviour.

1. Lord Alliance: Shares in Huntsworth plc - a company whose CEO is Lord Chadlington - which £15,500 to the party in August last year and has given money every year since 2008. Denied it at first but Electoral Commission found them out. The same company that had Baroness Cumberledge as one of their non-executive directors. Heavily involved in lobbying and PR.

2. Lord Clement-Jones: Partner in DLA Piper, a global law firm providing lobbying services to “clients in the health and social care sectors”. DLA Piper counts Southern Cross amongst its clients.  Lord Clement-Jones nominated Lord Hameed for his peerage, a nomination supported by Lord Dholakia. Lord Hameed sits on the board of Alpha hospitals, part of the Alpha Healthcare (C&C Alpha/C&C business solutions) group. The Alpha group has made significant donations to the Liberal Democrat party. In 2008, Lord Clement-Jones was the party treasurer. The Times exposed Lord Clement-Jones as being the man who nominated Lord Hameed, after the peer had originally said he had 'no idea.' Ownership of Alpha is usually assigned to Bhanu Dhruv Choudhrie who were accused of brokering an israeli arms deal.

4. Lord Lester: Has shares in Investor AB an investment company that invests in healthcare companies amongst other sectors. One company is Gambro, a global medical technology company, which sells its products to the NHS. Voted loyally with the bill amendments.

5. Lord Rennard: Director, British Healthcare Trades Association (BHTA) - Voted loyally on the Health and Social Care bill - The BHTA's purpose, as a trade association, is to ensure that the market for healthcare and assistive technologies is competitive, profitable and well-regulated. They work in partnership with industry, government, and other stakeholders. Set up a communications company with his wife called Rennard & McTegart Ltd. through this company provides public affairs advice to the British Healthcare Trade Association. Rennard & McTegart Ltd provide management, campaign, communications and fund raising consultancy.
6. Lord Sharman: Is the chairman of Aviva, has directorship and Shareholdings in Aviva plc - his being chairman is not registered in the register of interests - Aviva sells health insurance and will likely benefit from any increase in privatisation - they promote how you don't have to have waiting times if you take out insurance with them. Dr Doug Wright, principal clinical consultant at Aviva Health UK, said "I think we could start to see waiting lists increase again, especially for some of the elective procedures that are within the traditional medical insurance territory," Dr Wright said. Earlier this month, a spokesman for the Association of British Insurers noted that health insurance could be a "very useful product" of which many people in the UK could take advantage.

7. Lord steel: Non-executive Director, General Mediterranean Holding SA is a Business group with activities in amongst other sectors Trading & Pharmaceuticals. The http://www.gmhsa.com/images/spacer.gifIndustrial, Trading & Pharmaceuticals part is split into two companies of interest. Meditech UK Ltd has software currently installed at ten medical facilities in the UK including the NHS. MEDITECH is the leading supplier of healthcare information systems in North America. The other company is Crescent Pharma Ltd which directly and indirectly supplies a wide range of major distributors and customers within the UK, including the NHS.

8. Lord Taverne: Chairman of private health insurer Axa Sun Life’s monitoring board. Shares in Unilever whose European venture capital arm Unilever Ventures joined with a company called Vectura to form a pharma arm to their company. Shares in GlaxoSmithKline, who provide products to the NHS. Has shares in a company called Informa which provides authoritative research and analysis and up-to-the-minute business news, comment and events for all sectors of the healthcare, medical and life sciences communities. They present their findings to clients who then invest based on their reports. Has shares in Legal and General, which provides healthcare insurance.

10. Lord Watson: Chairman, Havas Media UK - MPG Media Contacts is an integrated agency, 100% owned by Havas Media. In April 2011 - MPG Media Contacts won the integrated media planning and buying account for Circle Health, the healthcare partnership that runs and builds hospitals.The account is worth just under £1m, according to MPG Media Contacts, and the scope of the work covers offline and online channels in the UK.  Circle, which became the first private UK firm to run an NHS hospital last year when it won the tender to run Hinchingbrooke Hospital, plans to build a network of 30 hospitals across the UK in the coming years.  Paul Frampton, managing director, MPG Media Contacts, said: "We're proud to be working with Circle, which does an excellent job in the Healthcare sector.  "Our primary aim will be to deliver them an integrated media strategy that will bring them real value this year."
Email ThisBlogThis!Share to TwitterShare to FacebookShare to Pinterest
Labels: 'conflicts of interest', 'Liberal Democrats'