Monitor the new NHS regulator has spent close to half a million pounds on recruitment fees to two head hunter firms both financially connected to Members of the House of Lords.

These new roles have required new staff and Monitor have chosen two firms with financial links to Members of the Lords to fill the key roles in their organisation. Following a Freedom of Information request, it was discovered that one of the companies, Odgers Berndtson, filled 12 senior personnel at a cost of close to £200,000 in agency fees.

Odgers employ Baroness Bottomley as Chair of the Board and CEO practice and she also holds shares in their holding company Broomco Ltd.  The former health secretary was able to vote on the Health bill despite her financial interests, which has opened up revenue channels for her employer. The Chairman, Richard Boggis-Rolfe, has given £207,500 in donations to the Conservative party between 2006 up until the General election. 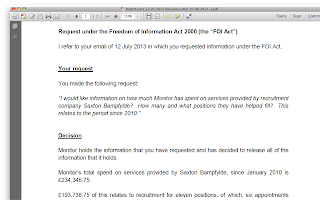 A further request has also revealed that the other company used was Saxton Bampfylde, who has gained revenue over £230,000 in fees since 2010. Labour Peer Lord Stevenson, the former Chairman of HBOS plc, which almost collapsed under his guidance has shares in the company. The Parliamentary Commission on Banking Standards recommended his being banned from the industry stating “Lord Stevenson has shown himself incapable of facing the realities of what placed the bank in jeopardy from that time until now".

Saxton Bampfylde according to the release, were involved in the appointment of Monitor’s CEO, a position currently held by David Bennett, a former partner of global management firm Mckinsey, who were instrumental in the content of the Health and Social care Act. In fact, individuals from the private sector are dominated in the key positions at Monitor from companies like KPMG, PricewaterhouseCoopers and McKinsey. Saxton Bampfylde recruited the executive director for cooperation and competition at Monitor, the director of organisation transformation and their chief economist as they consolidate their new position as Health and Social Care Act enforcer. Included in the costs according to Monitor were psychometric tests, which can include things like the measurement of knowledge, abilities, attitudes, personality traits, and educational measurement.

Monitor was recently exposed as having spent 40% of their overall budget on private consultants, which included £1.9million to David Bennett’s former firm Mckinsey. The NHS is under severe financial restraint across the service, but not Monitor it would seem, who have spent close to half a million pounds on recruitment for 23 positions at a cost of over £18,000 each individual appointment.

Stephen Hay: Also on the board - Managing Director of Provider Regulation – formerly KPMG - He has advised the boards of corporate and private equity houses and his portfolio of financial experience is wide-ranging and includes mergers and acquisitions, due diligence, IPOs, and risk assessment.

Adrian Masters: Also on the board - Managing Director of Sector Development – formerly McKinsey, IBM and PricewaterhouseCoopers

Miranda Carter: Executive director of Assessment  - formerly Deloitte, then PricewaterhouseCoopers - She has advised the boards of corporate and private equity houses and her portfolio of financial experience is wide-ranging and includes mergers and acquisitions, due diligence and initial public offerings (IPOs).