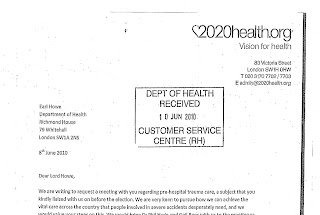 2020health calls itself an ”independent, grass roots think tank” whose purpose is to “create the conditions for a healthy society through research, evaluation, campaigning and relationships.”

Correspondence between the health minister Earl Howe, former patron of 2020 Health, and the think tank’s founder Julia Manning reveals some of the nature of these ‘relationships’.

At Julia Manning’s invitation, Earl Howe was a guest speaker at a ‘high-level discussion breakfast roundtable’ with key clinical and industry leaders back in February 2011, during the ‘listening pause’ in the passage of the Health & Social Care Act through parliament. After the meeting, Ms Manning wrote to thank Earl Howe. In the letter, which has been obtained by Social Investigations, she noted that Earl Howe had told the meeting that the message of the UK health being open for business was “not getting through.”

Manning had asked what should be done to attract “global companies to the UK.” She pushed for a “radical message” to make the NHS part of the “UK PLC”, an “asset” and “driver of economic growth.”


Manning warned that historically, the NHS had been good at “repelling business” and that investment in healthcare was “much easier in the USA.”

She laid the blame for the lack of movement at the door of the last Labour government, who she said had gained a reputation for “bureaucratic obstructions to market access.”

Such correspondence adds to the concern that the Health and Social Care Act was less about improving services and more about opening up the public-funded health service to big business. In other words, the ‘UK PLC’ Ms Manning envisages and has so earnestly promoted to Earl Howe. Throughout the progress of the Health and Social Care bill, Manning acted as a champion for private healthcare involvement in the NHS and wrote several articles that promoted the ‘benefits’ they bring into the NHS

In order to open up the NHS to a market, Julia Manning also advised Lord Howe that ”international corporations” should be met with a “charm and diplomatic offensive by high level officials.”

Many may baulk at the idea that our elected government should beg for corporate attention within the NHS. But prior to the Health bill being passed into law, Earl Howe told a forum hosted by healthcare market researchers Laing and Busisson that ‘‘The opening up of the NHS creates genuine opportunities for those of you who can offer high quality, convenient services that compete favourably with current NHS care… There will be big opportunities for the private sector”.

In later correspondence, Julia Manning went on a charm offensive of her own. In March this year she asked Earl Howe to become a member of 2020health and to ‘join us and share in this adventure’. Whether Earl Howe accepted her offer is currently unknown. (Update, 2020health have recently released their supporters and funders). Click here.


Aside from Earl Howe’s former patronage, four other peers are listed as current patrons - Lord Clement-Jones, Baroness Cumberlege, Lord McColl and Lord Rennard have connections to companies or organisations involved in private healthcare. The popularity in patronage might be because the House of Lords rules allow for patronage to take place without this having to be registered in their personal interests. But this patronage is used by 2020health to attract corporate members, who can become ‘Silver’ or ‘Gold Partners’ and receive an “opportunity to network with 2020health staff, patrons and associates”.


The identity of companies that have taken up this offer is as yet unknown, but what is known is that - despite their claims of independence - many of their reports are funded by big business. The policies these reports promote to “create a healthy society” may raise a few eyebrows.

In January 2010 - when Earl Howe was still both a patron of 2020 Health and opposition health spokesperson - 2020 produced a report sponsored by Bayer healthcare entitled ‘Responsibility in healthcare: changing the culture’. The report advocated the end of free treatment for minor or for ‘repeat offenders’ under a section on ‘lifestyle’ illnesses. It suggested that electronic records could facilitate a penalty system for those who repeatedly turn up to A&E drunk or ‘high’. In addition, the report bemoaned that “the culture of people being deterred from seeking help because they are worried about ‘being a burden’ is fast fading”.

2020 Health is also a leading advocate for ‘telehealth’ - the replacement of face to face contact with telephone and electronic monitoring devices. Its report, Healthcare without Walls was published just after the government had published its White Paper “Liberating the NHS” states that ‘the White Paper creates the environment in which the demand for telehealth-enabled services can be fostered”. The report was sponsored by private healthcare corporations including Tunstall (a leading provider in telehealth), Accenture, Vodafone, Pfizer and others. Despite 2020 Health’s stated emphasis on “research” and “evaluation” there have been a number of reports highlighting safety and cost problems with the telehealth model. The same report also pushes the use of personal health budgets…’ a move seen by many as a step towards privatisation and an insurance model.

Manning’s letter to Howe reveals how she and her “consultative authors” lobbied Oliver Letwin hard on the point that David Cameron should be known as the “Technology PM”. This attempt to label Cameron “didn’t succeed” but Ms Manning is unperturbed. She ended her letter to the Earl by stating “we have to start firing up radical flares to attract investment and ensure resistance to change in the NHS is not tolerated.”


Such support for both big business, which funds their reports and Manning’s suggestions for David Cameron’s image suggests 2020health are anything but independent. Furthermore, the message turning the NHS into an economic arm of ”UK PLC” brings an end to the illusion that the Health and Social Care Act is about improving patient care.

This was co-published on Our NHS here.