In 2009, the Rt Reverend and Crossbench Peer Lord Eames, was appointed as the head of a cross party review group to draw up new rules that would ban Lords from taking money from lobby firms to ask questions in parliament.

The rule change took place following allegations that four Labour Lords had offered to try and amend laws for up to £120,000. At the time, not only were there no rules to prevent such behaviour, but there was also no Commissioner for Standards to investigate wrongdoing.

Part of the problem for this stems from a lack of punishment for those who abuse their position. When a ‘noble’ peer is caught red-handed breaking the rules, they are left to remain in the corridors of power able to vote and debate on legislation as they were able to before. One of those accused in the 2009 sting by the Sunday Times was Lord Snape.

The paper stated that the Labour peer had agreed to obtain an exemption in a Business Rates Supplement Bill in exchange for £24,000. The subsequent investigation found he had "expressed a clear willingness to breach the Code of Conduct". No action was taken.

Lord Taylor of Blackburn was recorded saying "Some companies that I work with would pay me £100,000 a year." His punishment was to be suspended for six months but he too remains in his position as a Lord.

When Cameron was vying for votes prior to the election, he gave a speech, in which he highlighted the issues of lobbying, stating it would be the next big scandal. “We can’t go on like this”, he informed us, “I believe it’s time we shone the light of transparency on lobbying in our country and forced our politics to come clean about who is buying power and influence.” 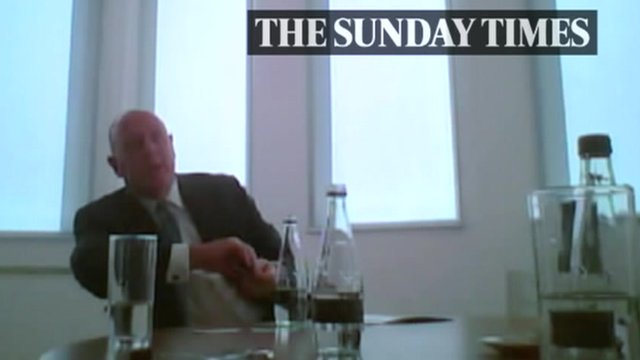 But what has he done. Well the answer to that is nothing of substance. When Peter Cruddas the former Tory party co-treasurer was caught on camera announcing access to the Prime Minister for a donation of a quarter of a million, David Cameron said "It's quite right that Peter Cruddas has resigned. I will make sure there is a proper party inquiry to make sure this can't happen again." What can’t happen again? If Peter Cruddas was to be believed, and he probably shouldn’t, then he was lying about access to the Prime Minister. If this was the case, then all that needed to happen was to get rid of him. He was of course allowed to resign rather than be sacked, which is another matter that angers people. The Conservative party will miss his money, as he has given over a million pounds to the party since 2009 and £200,000 of that just a week before his resignation.


So what else has Cameron done to defeat the sleaze that oozes through the walls of Westminster?
ACOBA toothless
In 2011, the Advisory Committee on Business Appointments (ACOBA) became responsible for providing restrictions to ministers or senior civil servants who wish to work in the private sector. This Conservative promise means that when Jim Easton left his position as ‘Director of Improvement and Efficiency’, at the Department of Health to become Managing director of Care UK, ACOBA stated that there must be ‘a waiting period of three months from his last day of service; that for 12 months, he should not become involved in advising on bids or contracts for Department of Health business; and that, for two years from the same date, he should not become personally involved in lobbying UK Government on behalf of his new employer.’

ACOBA, which is overseen by Lords, has been accused of having no teeth. Paul Flynn, the Labour MP who has worked tirelessly on the issue of lobbying, has described the body as being run by people who “think it's normal for an MP being paid £65,000 for a full-time job to take on five other jobs."

And the rest?
However, aside from minor restrictions imposed by an otherwise compliant ACOBA, we are still waiting for real measures to come in. The register of lobbyists is on its way as part of a lobbying bill to be brought in by the end of July, a register once opposed by Labour back in 2006. On the face of it, Clegg, who was leading the charge chose to stand away from the process because his wife is a lobbyist, which was slowed the process. Now, as the scandal breaks on corruption in parliament, a bill has miraculously appeared. However, rather than bring into line corporations, this government appear to have focused on unions who will be required to produce an annual audit of their membership, which can then evaluate accuracy for strike action ballots. Quite what state the bill will be in once it reaches its conclusions, is unclear, and no doubt we will see the irony of lobbying taking place to weaken the lobbying bill's content.

Parliament is full of lobbyists. Research conducted by transparency campaigners Spin Watch, revealed 15% of Tory MPs elected during the last election were from a lobbying background. Not only that, but Cameron has chosen to hire a lobbyist directly into the heart of his health policy unit up until the election. Nick Seddon was the former deputy director of the free market think tank, Reform. He worked tirelessly to help ensure competition remained in the Health and Social Care Act on behalf of Reform’s corporate supporters of which over half are companies involved in healthcare.

These processes are all part of the revolving door that see people come and go through parliament and leave into big business, offering the company an insight into government thinking.  In the other direction, they are lobbyists and having  lobbied government, they are then invited in to produce policy for corporations they used to represent and then off they go again.

Healthcare coup
Social Investigations discovered over 200 parliamentarians with recent past or present links to companies or individuals involved in healthcare. All of them able to vote, make amendments and in one case move their company into a position to make money from the legislation on which they voted. The same companies that employ Lords and MPs, are the same ones who sit as corporate partners in think tanks who are invited to help them produce reports, which end up as policy which often opens up opportunities for increased revenues.

Take Conservative Peer Lord Blackwell, he voted on the Health and Social Care Bill, then the company of which he is a chairman, entered into a new area for them, with an increased market made possible by his vote. No wonder these people are a target for lobbyists and highly employable.

Many Lords may not be trustworthy, but they are certainly trusting and have once more fallen for a sting operation. Cabinet Minister, Francis Maude has stated he would be ‘astonished’ if the lobby register didn’t make an appearance, but why are the media looking for his word on any matter? In 2009, he was found to have claimed £35,000 in two-years for mortgage interest payments on a London flat, when he owned a house just down the road.

Power corrupts, it is not easy to be in power and behave properly, so the rules need to be a lot tighter than they are and the punishment a genuine deterrent. To be in a position whereby you can change law to better the public good, is a position of privilege, one that is abused with regularity which is a disgrace that must be met head on.

People will have their own views on what that should happen. We could make it so that Lords get elected, which was something so vociferously opposed by the Lords and then crushed by the Conservatives or we could abolish them all together as considered here by Tony Benn?

If Cameron truly wanted to do something to prevent the benefits of lobbying, then he could make it against the rules for MPs and Lords to be able to vote, ask a question or make an amendment if they have a non-financial or financial link to any organisation. This would take the sting out of the reason why so many parliamentarians are offered employment in key positions in so many companies. Any Lord or MP caught breaking the more serious of rules ought to be sacked, not allowed to resign or simply suspended only to return and if they break the law well that’s clearly a matter for the police.

For the moment we are in a situation whereby those who have been a part of the various scandals that have taken place over the last 4 years, remain in charge of introducing new rules to prevent future scandals. This is intolerable. It is important to note that local councillors have many more restrictions on their ability to vote and debate when they have a prejudicial interest. It would be good if they were to denounce the flaws in the system.

Could it be that the MPs and Lords have allowed themselves more freedom so that lobbying can carry on as normal? The lobbying bill will be of interest, though I am quite sure key measures will be omitted. They have been forced to announce it but they are also very clever at taking the sting out of rising anger. This bill, will likely do nothing to prevent the institutional corruption that exists, the revolving door, the directorships and appointments that provide a seat in power for the corporations writing policy for themselves. This battle for democracy continues.