The Parliamentary Under secretary for Health Earl Howe, who led the Health and Social Care bill proceedings in the House of Lords, was listed as a patron for pro-market think tank 2020health, just before the elections.

Knowledge of the Earl’s patronage has only just appeared after the discovery of a policy paper written by 2020health for the Spanish right-wing publication ‘Sanifax.’ The ‘Dosier Especial’ titled ‘a healthier nation’, was a Green policy paper produced in January 2010 and introduced in Spanish as having been created with the ‘support of David Cameron’ on the ‘necessary reforms.’

At the time of the report, the Chairman of the think tank was Tom Sackville, a former Conservative minister and Parliamentary Under –Secretary for Health who is the Chief Executive of the International Federation of Health Plans, which represents one hundred private health insurance companies in 31 countries.

2020health is now led by founder Julia Manning a former director of the UK Institute of Optometry and Conservative candidate in the 2005 election, has been vociferous in her support of an increase in private health into the NHS.

2020health reports
The self-called ‘independent’ think tank has produced multiple reports funded by health corporations, which include one titled ‘Responsibility in healthcare: changing the culture’. The report sponsored by Bayer healthcare was produced in January 2010, when Earl Howe was still a patron and advocated the end of free treatment for minor or for ‘repeat offenders’ under a small section on ‘lifestyle’ illnesses. Electronic records, the report suggested can facilitate a penalty system for those who repeatedly turn up to A&E drunk or ‘high’. In addition, the report recommendations bemoaned ‘the culture of people being deterred from seeking help because they are worried about ‘being a burden’ is fast fading’.  At the time, Earl Howe was the opposition spokesperson for Health and Social Services and still a patron. A further report written in the same period was published just after the government had produced its White paper Equity and Excellence: Liberating the NHS. The focus of this report was on the area of telehealth and was titled ‘Healthcare Without Walls’. This report was also sponsored by private healthcare which included Tunstall, a leading provider in telehealth, Accenture, Vodafone, Pfizer and others. The opening summary states how ‘the White Paper creates the environment in which the demand for telehealth-enabled services can be fostered…through personal health budgets…’

2020health is a leading advocate of telehealth technology, and have claimed the technology can make huge savings. However, all is not clear about the benefits of ‘telehealth’. A trial in the UK run by the British Medical Journal revealed costs of running telehealth were higher than without and the technology failed to improve ‘quality of life’. Furthermore an analysis in the US suggested the telemedicine, which is part of a telehealth programme, ‘tripled’ the death rate in elderly patients.

2020health’s support for private healthcare involvement and sponsorship from big business for their reports may well indicate who makes up their membership. However, despite several requests by Social Investigations, 2020health have so far refused to publish their membership list and denied it contains health insurance companies.

Lords interests
The dedicated promotion of telehealth by 2020health no doubt pleases Conservative peer Lord Patten, who is a senior advisor for Charterhouse Development Capital Ltd - who purchased leading telehealth provider and sponsor of the 2020health report, Tunstall. Further parliamentary interest in the new technology comes in the form of Conservative peer Lord Flight, who is the Chairman of Arden Partners plc, an investor in Deltex Medical Group who produce a telehealth product adopted by the NHS.

Patronage of 2020health is popular amongst peers. Liberal Democrat Peer, Lord Clement-Jones is a 2020health patron and a partner for DLA Piper, who provide lobbying, public affairs and trade policy services as well as advice on how to get access to public service delivery contracts. Another Peer and patron is Baroness Cumberlege, who runs her own training and consultancy company called Cumberlege Connection. The Conservative Peer moved herself into an alliance led by PwC, developing the new Clinical Commissioning Groups, prior to the Health and Social care bill becoming an Act. When a complaint was placed with the Commissioner for Standards she responded by saying 'Disappointingly since joining the alliance Cumberlege Connections has not earned any income through the alliance.'

Pushing the market
Earl Howe, a former banker has recently been threatened with expulsion from his advisory position at the Royal College of Physicians for having ‘mis-sold’ the health reforms. Earl Howe’s support for more private healthcare involvement is clear. When speaking at a forum hosted by healthcare market researchers Laing and Busisson prior to the Health bill being passed into Act, he told the audience ‘‘The opening up of the NHS creates genuine opportunities for those of you who can offer high quality, convenient services that compete favourably with current NHS care… There will be big opportunities for the private sector’.

His recent connection to 2020health is not severed and he remains a frequent guest speaker at events hosted by the think tank such as this one on further cuts to the NHS, an invitation only event.

In his opening speech on the opening day of the Health bill in the Lords, Earl Howe said “We will support an active role for the independent sector working alongside the NHS in the provision of care” This ‘active role’ included his attendance at a top-level meeting with a healthcare lobby group one year before his opening speech in the House of Lords. 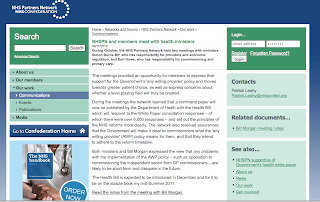 In October 2010, Earl Howe, alongside Simon Burns (the then Minister for Health), and Andrew Lansley’s Special Advisor, Bill Morgan, attended two meetings with a private healthcare lobby group, the NHS Partners Network (NHSPN). These meetings one of which included a Care UK representative came to light following the discovery of a document written by the NHSPN, which revealed the discussions took place three months before the Health and Social Care bill was introduced to parliament.

The purpose of the discussion, according to the document, was to give members an opportunity to ‘express their support for the policy of ‘Any Willing Provider’, which became ‘Any Qualified Provider’, and to give those present a chance to express any ‘concerns about whether a level playing field would truly be created’. Furthermore, the lobby group was informed that the government felt as if opposition to the ‘independent’ sector from GP commissioners would likely be ‘short-term’ and ‘dissipate’ in the future.
What was said is unclear, although meeting notes were taken and although visible from the NHS Partners Network’s website they were security protected for their corporate health members only. This restriction meant the members had privy to a key meeting in which information was discussed before both parliament and the general public.

Rules – not fit for purpose
The rules that the Lords have to abide by are plentiful, but under their Code of Conduct, it states that patrons ‘should not be registered’. Although it continues ‘There may however be occasions on which such interests should be declared.’ The Code of Conduct also states that Members must “declare when speaking in the House, or communicating with ministers or public servants, any interest which is a relevant interest in the context of the debate or the matter under discussion.”

However, if his patronage was not a conflict of interest worth mentioning, then why give it up upon the general election? The rules may be lax on this matter but surely his patronage of an organisation headed at the time by an individual in charge of a private health insurance body, which openly supports increased private healthcare involvement in the NHS warrants registration in his interests. Earl Howe was instrumental in aiding the pro-market Health and Social Care bill into Act. Lord Warner, the Labour former health minister, said “his silky skills got the bill through”.


What difference would it have made if his fellow peers had known about his patronage is unclear but they deserved to know; as too did the public. Thanks to flaws in the rules, his omission it would seem was one of choice, as was his decision to go to a meeting with private healthcare to reassure them before parliament saw the bill. All this raises further questions about what Earl Howe’s true intentions were behind his support for the Health and Social Care bill and may well bring his expulsion from the Royal College of Physicians back for discussion.
Email ThisBlogThis!Share to TwitterShare to FacebookShare to Pinterest
Labels: '2020health', 'Earl Howe', 'Health and Social Care bill', 'telehealth'