This is part two of a two part report on Healthcare UK. See part one here first.

Expand the ‘domestic market’
The use of the ‘NHS brand’ to sell healthcare abroad has greatly benefited commercial organisations, with over 80% of contracts landing in private hands. This disproportion towards private healthcare contracts is also taking place on a much larger scale in the NHS. Since the Health and Social Care Act officially began in April 2012, research carried out by the NHS Support Foundation revealed 70% of NHS contracts have ended up with private firms amounting to billions of pounds worth of income.

What this amounts to is an aggressive expansion of the UK healthcare market, which although not mentioned in government propaganda, is their intent. Healthcare UK was also meant to benefit the NHS, but contained in the memorandum signed between Healthcare UK and the Chinese Ministry of Health, it is clear that the main areas of cooperation are designed towards channeling contract opportunities towards private companies. See Appendix 1

The financial awards from China are potentially immense with David Cameron claiming the Chinese healthcare market will grow by $400 billion by 2017. China is seeking to develop a “safe, effective, convenient and affordable” healthcare system to both urban and rural areas by 2020; furthermore, Premier Li Keqiang recently stated he wants to “open the door for private capital”. It is no wonder Cameron wants the UK private sector to be a part of that process. 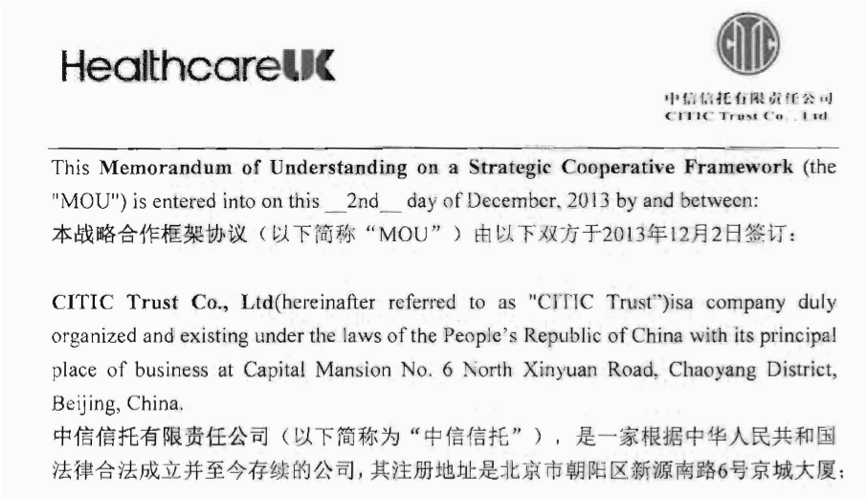 A further MOU held between Healthcare UK and CITIC Trust, a Chinese investment arm of the CITIC Group, reveals the extent of cooperation required for their partnership to work. ‘Citic’ it reads, will provide ‘financial support for selected UK healthcare companies wanting to ‘extend their business in China’. In return, Healthcare UK will act as a ‘source of information’ on the ‘UK healthcare industry’, receive access to health ‘policy’, ‘confidential’ information, as well as be invited to form partnerships with ‘UK healthcare organisations.’


When asked about the nature of the ‘confidential’ and policy information provided to CITIC, Ian Cranshaw the Chinese lead for Healthcare UK said, “The confidential information referred to would likely be commercial in confidence type information”. However, he failed to address the policy information that would be imparted. Will CITIC be in advance notice of policy so that it can better select its investments? Will CITIC receive policy before parliament or the people?

The secretive nature of Healthcare UK beyond the marketing publications that adorn its website, means such questions remain unanswered. 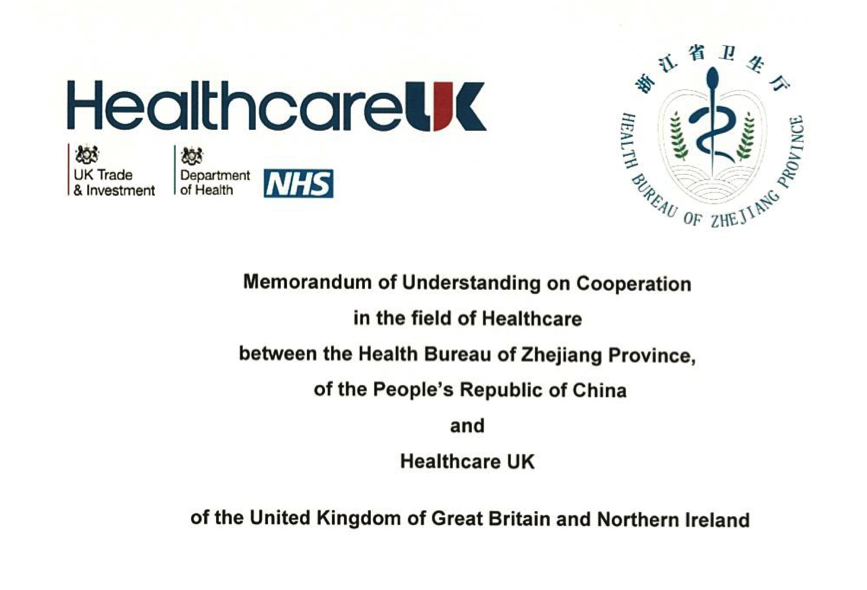 The opportunities for private companies don’t end there. A further MOU made between Healthcare UK and the health Bureau of the Eastern coastal province of Zhejiang contains a much wider level of agreement.

These include the design of ‘Health policy and regulation’, ‘Training Medical Staff’, establishing primary care provision, and ‘Systems for national and private insurance’. In addition Healthcare UK will find UK companies to aid China in ‘public and private hospital finance, construction, operation and regulation (PFI)’.

The policy of PFI in the UK has been catastrophic for the NHS with the treasury predicting a total financial burden of £242 billion. PFI continues to plague NHS Hospital Trusts to the point of near bankruptcy, which led to the first takeover of the running of an NHS hospital in Cambridgeshire by Healthcare UK beneficiaries Circle.

Elite private companies largely run PFI, and it is the cruelest of irony that more PFI opportunities should be made by using the ‘NHS brand’. Companies like construction firm Interserve, who have Conservative Peer Lord Blackwell as a director, have raked in millions of pounds through selling some of their PFI interests. Serco and Carillion, who both have representatives on the board of Healthcare UK, have also gained major revenue through PFI schemes, and this particular avenue in China, will do nothing for the NHS.

In order to gain “business wins” in the Zhejiang province, Healthcare UK provides pilot programmes from which they aim to gain contracts for those involved. Yet here again, Mr Cranshaw explained “the pilots involve private UK companies rather than NHS institutions”, and as the pilot schemes are ongoing, what these pilot schemes are and who is involved face commercial restrictions.

The government has claimed the three agreements with China will provide £120 million to the UK economy, though how they have reached that sum is currently unclear and a request for a breakdown of these figures has been made. Of course any deals that are confirmed will not necessarily have the names of the companies attached and so we will be unclear whether those gaining contracts are based in low tax jurisdictions; have donated to any political party or indeed held meetings with government officials.

The push to be involved in the global healthcare market is well under way. Private companies dominate the list of firms put forward by Healthcare UK to operate in China and the contracts won.

The NHS is staring into the barrel of the Health and Social Care Act legislative gun, weighed down by debt and deliberate underfunding. The idea that an overstretched NHS can compete financially or even manage to operate an international trade arm is highly questionable. Healthcare UK appears as yet another government vehicle designed for the market over that of the NHS that has very little intention to benefit patients.

When the government announced the Chinese deal, the NHS was not mentioned in their press release and based on the contracts won and the money gained so far, the NHS will be but a minor beneficiary of the global expansion that markets in their name.

The five areas of cooperation listed in the agreement with Zhejiang MOU are: