Camp resident: Ten reasons why I chose to camp at St Paul's Cathedral 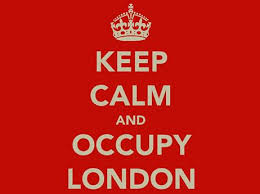 1.    The Free market capitalism experiment has failed. It requires endless unsustainable growth and relies on deregulation of the markets as well as the continual weakening of employees rights here and abroad. The extraordinary ramping up of global economic activity is without historical precedent. It appears to be totally at odds with our scientific knowledge of the finite resource base and the fragile ecology on which we depend for survival.
2.    Huge corporations have too much power, too much money and have more access to our politicians than we do. Remember lobbygate? It hasn't gone away.
3.    The thirst for profits has led to the degradation of an estimated 60% of the world’s ecosystems.
4.    Our dependency on fossil fuels must end – we must implement a road map to eradicate fuel poverty and this must include the move away from fossil fuels use.
5.    End privatisation of all public utilities. If not renationalised, then run not-for-profit.
6.    Bring UK cycling levels up to that of the Dutch where 27% of all trips are made by bicycle.
7.    No NHS privatisation
8.    Reverse the culture of consumerism. Consumerism hurts our environment using vital resources on unnecessary production. Change the way we advertise, introduce quiet areas on public transport. Regulate advertising properly with Scandinavian type policy.
9. Only allow one media publication to be owned by an individual or group. Murdoch says it all.
10. These politicians in power and in shadow government are the same ones who voted for the illegal war on Iraq, the same ones who abused the expenses system, who presided over lobbygate, who serve corporations over the public and intentionally produce policy that widens the gap between rich and poor. 23 out of 28 members of the cabinet are millionaires. They are in the financial elite. Why are they allowed to remain in power? What is wrong with a system that fails to remove cheats and frauds from the seat of public office? Why are people like Lansley allowed to abuse their expenses and be placed in charge of our NHS which he then pushes law through to privatise it? Our democracy is weak, we are faced with increasing surveillance in which protest is kettled, monitored and largely ignored. This must change.

My views are my own and do not speak on behalf of the whole movement.
Email ThisBlogThis!Share to TwitterShare to FacebookShare to Pinterest