The Dutch are streets ahead 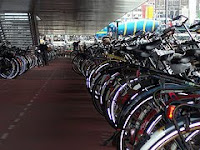 Cycling in the UK is on the increase. Cycle lanes are appearing in all our towns and cities, providing safer routes for school runs, commuter routes for workers and country trails for those of us wanting a leisurely ride. We are undoubtedly on the move and it would appear, in the right direction, but Andrew Robertson asks, how far have we come, and how far do we still have to go before we are able to compare ourselves to the the most advanced cycling nation on Earth - the Dutch?

I start with a few facts:


1. There are more bicycles in the Netherlands than there are people.


2. There are twice as many bicycles as cars.


3. In 1992 Amsterdam residents voted to decrease car parking in the City centre.


5. In Gronigen, cyclists are allowed to do right turns at junctions when the light is red, when cars are not. Cyclists also get an advance green light.

So how did this former car dependent country turn into a cyclist's paradise? 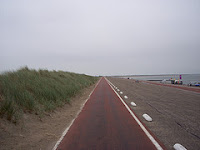 Let's start with the topography. The Kingdom of the Netherlands is as flat as a flounder, with approximately 27% of the land being below sea-level. The highest point is 322.7 metres (1,059ft), which in most countries would be called a hill - but not in the Netherlands where they have humorously named it 'Mount Vaals'. There’s no doubt about it; a land whose highest point barely pokes its nose above the ground lends itself towards an activity such as cycling. But it takes more than a friendly terrain to get a population out of a car and onto a bicycle. As we know, the UK is hillier than Holland, but that didn't stop the rise of the bicycle in Britain during the Victorian era. In fact, once mass production began in 1890, everyone was using them for both work and leisure. It was trendy, affordable, practical and common. So the hills can't be blamed for cycle apathy, and nor can the bike itself. It's perfectly capable of steep gradients with a little assistance from its rider.


One of the first requirements to encourage bicycle use, and perhaps the most obvious, is a proper cycle infrastructure, a network that allows children to cycle to school, and people to go to work without fear of losing their lives. One of the many reasons people give for not travelling by bicycle in London for example, is the fear of motorised vehicles; or rather the fear of being hit by one. On London's manic roads, it often reaches war-like status, with bike lanes blocked by parked cars, and bus lanes shared between cyclists and stressed out taxi drivers. It's a recipe for disaster. There's no talking to your cycling companion on your journey and you can’t even signal properly in case your wheel hits a bump and sends you into oncoming traffic. Delicate sounds of bird whistles, if they exist, are drowned out by the revving of engines and the beeping of horns from irate drivers shouting encouragement like, 'C'mon out the facking way!' So high is the noise level of car engines that if it were measured in a nightclub, the authorities would close it down. The roads are full of vehicles moving at an average speed of 9mph, which is slower than in the days of horse and cart! Static traffic fills the air with toxic car breath, increasing incidents of asthma in children. But despite this hellish environment, for many, it remains their preferred way of getting around the city.

It is irrefutable that the car is the major reason why cycling almost disappeared from our streets. The benefits it offered at a time when our roads were less full must have been tremendous, and as the cost of the car fell down, then unsurprisingly the mass population switched their mode of transport. Back in 1950, according to the Department for Transport, the bicycle made up 37.48% of all road traffic vehicles, today that figure is 0.98%. Between 1961 and 1965, the greatest period of growth in car use in the UK. Car traffic rose by 70.29% in that period. In the same period bicycle traffic fell by 41.67%.

This clearly didn't happen just in the UK. 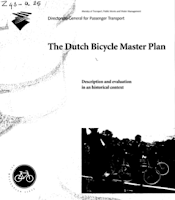 During the 1960’s, the Dutch were also on their way to car dependency. Until 1960, the number of passenger kilometres travelled by bicycle was greater than by car. However just as in the UK, bicycle use declined sharply thereafter and by 1974 had returned to its 1950 level. What happened next was both remarkable and radical, changing the entire vehicular landscape of the Netherlands. Good old-fashioned lobbying in the 1970’s by the Dutch cyclists union, Fietserbond, persuaded the forward-thinking administration of the time to invest heavily in a nationwide bicycle infrastructure. A proposal was made as early as 1972 to create separate routes for bicycles and moped traffic, which resulted in a 'bicycle traffic plan.' Change had begun, and the traffic circulation plan of 1978 said priority should be given to 'projects under preparation within the Bicycle Route Network'.


Broad political support arose for developing the network and expanding facilities.2 And what was the result? Nearly a third of all journeys today are made by bicycle. It is a way of life. Every road planning scheme considers the safety of the cyclist, the bicycle has priority. Even in the flat lands of Denmark they can't compete, where a respectable 19% use the bicycle for their wanderings. And yet they still don't sit on their laurels. The standard amount of funding for cycling initiatives in English local authorities is around £1 per citizen, per year. In contrast, Dutch towns such as Amsterdam are currently spending around £10-20 per year.

So it is little wonder then that in the UK, under 3% of all journeys are made by bicycle. We remain a nation of car lovers, who make up 79.49% of all road traffic vehicles. In 2003, the government chose to spend £5 billion on expanding the M25 in a PFI initiative, and made much ado about providing £140 million to the quango Cycling England. That said, cycling is on the increase, a momentum is taking place which appears unstoppable. So are we finally moving towards the Dutch mentality, where priorities to the bicycle are both cultural and financial?


Different parts of the country are on the saddle significantly more than the national average. Especially those that were selected as part of the 'Cycling Demonstration Towns Programme' (CDTP), which began in 2003 after the Labour government gave Cycling England the £140 million. The initiative saw six towns across England receive European levels of funding to increase their cycling levels, as well as provide 500,000 10-year olds with cycle proficiency, and connect 500 schools via traffic calmed or traffic free routes to the wider national cycle network. It worked. All six towns saw an increase in cycling of 27%, and cycling to school more than doubled where towns invested most in children. We do have a national cycle network in the UK, but for the most part, it only exists because of the valiant efforts of the Sustrans charity who through a combination of determination and ingenuity pieced together a patchwork of routes and trails that spread throughout the country. However, it is a million miles from the Dutch model. However a further £50 million to expand our network was part of a lottery fund that was voted for by the public, showing the desire is there. Initiatives such as the Cycle to Work programme and the hire bike scheme in London are continuing to advance use. The number of cyclists in London has soared by 83% since 2000. The expansion is taking place everywhere. A new initiative, the Concorde project has begun in South Gloucestershire with the aim of providing cycle connector routes between secondary schools in the area - allowing pupils to travel to lessons between schools as part of the curriculum. Cycle Blackpool have a project for the disabled that offers a large range of adapted bikes to allow people with disabilities to take up cycling with weekly 'try it', sessions.
But what now? A new government brings changes, and despite having a prime minister who enjoys cycling, the Conservative government have decided to abolish Cycling England. As Philip Darnton the former chairman of Cycling England said "it is the loss of the nationally extended network of enthusiasts, with their acquired knowledge, skills and expertise which is the real waste". The government have announced that cycling will make up part of a sustainable transport programme within local authorities, but they have failed to announce how cycling will fit into the overall programme. What if certain councils have a car enthusiast at the helm?The Conservative led council of Brighton & Hove have recently announced they want to remove the cycle lane which connects South Downs national park with Hove's seafront with a claim that it is not well used. It was completed in 2008, and was part of the centrepiece of Brighton & Hove's successful bid to become a Cycle Demonstration Town.
We have come far, but have we reached critical mass? Climate change, hard economic times, with the added pain of having the world's most expensive railway system all lead towards a likelihood of continued cycle infrastructure expansion. In amongst it all is our love of the bicycle. Change is taken place, and a few dinosaurs are not about to drag us back to a world of car dependency. Let us remind Philip Hammond the current head of the Department for Transport what his own department said in 2008 in a document titled 'A sustainable future for cycling'. 'Air pollution is currently estimated to reduce the life expectancy in the UK by up to 7-8months with estimated equivalent health costs of up to £20 billion. So if he is looking for cuts, then it should not be in cycling.


It remains so that the Dutch is our standard bearer, for there is no doubt when it comes to the Tour de Cycle Infrastructure, the Dutch are wearing the yellow jersey.

1. At the frontiers of cycling. Policy innovations in the Netherlands, Denmark and Germany- Rutgers University